To share your memory on the wall of Betty Adamson, sign in using one of the following options:

Print
Memorial services for Betty Cox Adamson of Canton, who passed away on February 4, will be held under the direction of Bartley Funeral Home at First United Methodist Church of Grand Saline on Wednesday, February 10, at 2 p.m.

Adamson was ... Read More
Memorial services for Betty Cox Adamson of Canton, who passed away on February 4, will be held under the direction of Bartley Funeral Home at First United Methodist Church of Grand Saline on Wednesday, February 10, at 2 p.m.

Adamson was born October 7, 1929, in Dallas, Texas, the daughter of L.M. and Mary Cox. She graduated from Forest Avenue High School and attended Southern Methodist University. Her first job at age 14 was at Neiman Marcus.

She married Gordon F. Adamson on July 12, 1952, and they were married for 55 years. They started their lives together in Orange, Texas, where they had their first child, and they lived in Saltville, Virginia, before moving to Grand Saline in 1959 where their second child was born.

Adamson was focused mainly on raising her family but worked for Dr. George Marsh and Dr. Houston Long as a business manager, started a business called The Adamson House and worked for the U.S. Post Office. Her true calling came when she got tired of driving her children to the Mineola Public Library and decided to see if she could get a library started in Grand Saline.

She persuaded the city council to provide some space in the new city hall being constructed at the time and, in 1966, the doors of the Grand Saline Public Library opened with a host of volunteers in place to make it work. She served as chairman of the library board for over 30 years, and it remained her source of joy and pride all her life.

Adamson served as the first city councilwoman for the City of Grand Saline and was named Woman of the Year by the Grand Saline Chamber of Commerce. She was a member of First United Methodist Church of Grand Saline where she worked for a time as the church secretary, taught Sunday school classes and sang alto in the choir. She was a founding member of a local book club that she attended monthly for over 20 years and took great joy in occasional trips to the U.K. where she tracked down her Scottish relatives.

She was preceded in death by her husband; by her parents; and by her brother L.M. Cox Jr.

She is survived by her daughter, Jan Adamson of Canton; her son and daughter-in-law, Grant and Johnna Adamson of The Colony; and her grandson, Taylor Adamson of New York City.

Memorials may be made to the Grand Saline Public Library or to an animal rescue organization of the donor’s choice.

Considering the State and CDC's current guidelines for COVID-19, please understand the need to keep a safe distance between those in attendance and wear a mask inside the building. We are all navigating the evolving situation together and want to honor Mrs. Adamson and her family while keeping everyone healthy.
Thank you for your understanding and support.

We encourage you to share your most beloved memories of Betty here, so that the family and other loved ones can always see it. You can upload cherished photographs, or share your favorite stories, and can even comment on those shared by others.

Posted Feb 06, 2021 at 03:08pm
People in our lives come and go, but very few capture your whole heart at the same time. From the first day I met Ms. Betty she had my heart. I have never met a more intelligent, honest, spunky, caring and loving lady that radiated such beauty. From our talks, games, her telling me my pants were too big to just being silly became the highlights of my days. She was one of a kind and will be forever missed. Praying for each one of her sweet family members during this difficult time. ❤️

Posted Feb 05, 2021 at 03:35pm
In loving memory of Betty Adamson . May this tree be a living tribute to your life . To honor Jan and Grant as a testament of a life well lived. 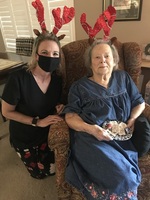 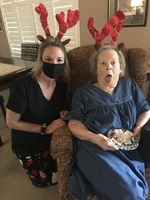