To share your memory on the wall of James Poston, sign in using one of the following options:

Interment will be in Pleasant Ridge Cemetery, Alba.

Mr. Poston passed away June 7, 2021, in Tyler. He was born March 14, 1937, in Alba to Granville Gilbert and Adolphus Ermagene McKenzie Poston. J.D. lived all his life in Alba and was a member of Enon Baptist Church, Alba. He served in the United States Navy and worked as a drilling superintendent in the petroleum industry. He was involved in the developing of oil and gas regulations. J.D. loved rodeo, western movies, and reading Louis L’Amour books. He also enjoyed fishing. He was preceded in death by his parents; infant brother, Gilley; and grandson, Mike Poston.

Plant a Tree in Memory of James
Plant a tree
1 tree has been planted in memory of James Douglas "J.D." Poston
JW 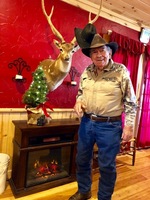